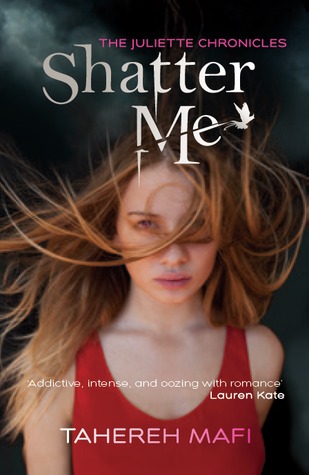 But things happen when people touch me.

No one knows why Juliette’s touch is fatal, but The Reestablishment has plans for her. Plans to use her as a weapon.

But Juliette has plans of her own.

After a lifetime without freedom, she’s finally discovering a strength to fight back for the very first time—and to find a future with the one boy she thought she’d lost forever.

A wonderful, gripping read that I tore through in under three hours. Shatter Me is a different kind of dystopian novel, set some ten years after the collapse of human society due to climate change, fuel shortages etc. The story is riveting – starting with Juliette’s isolation and then slowly revealing the circumstances under which she was imprisoned. I think this is a great way of telling the story because it hooks the reader in.

Juliette is an interesting character because her isolation has made her borderline insane. She is deeply untrusting and closed off to the world (and to be honest I can’t blame her). Her disjointed thoughts and damaged thought process are effectively portrayed by alternating short, halting sentences with paragraph long sentences. Striked out sentences are also used to signify the thoughts that Juliette doesn’t want to have or doesn’t think she should have. It takes some time to get used to this writing style, but it’s worth it.

A final note – I like the cover because it’s powerful, and that’s what attracted me to the book (and then I read the blurb and some reviews and decided I had to buy it NOW), but the girl on the cover seems too intense for my perception of Juliette. As Juliette is a broken character in the novel, and slowly starts accepting herself, I think the girl on the cover is too in-your-face for Juliette.

I highly recommend this book, and think Tahereh Mafi is a woman to watch!

Take Back the Skies by Lucy Saxon
Reached by Ally Condie

Ignite Me by Tahereh Mafi
The Hunger Games by Suzanne Collins